Why Standees Work in Real-Time-Visualisation

When producing a visualisation of a space, you need to add people into the scene. Having figures inhabiting a space stops it from feeling like a beautifully-rendered ghost town, as well as giving a sense of scale and movement. The problem is that creating characters is a lengthy and skilled process that can add significant time and cost. And this indeed is the exact problem we hit when producing the Farnborough Real Time Visualisation.

The primary issues were budget and time, there just wasn't enough of either to make a fully-realised set of people. Since this project was developed shortly after the release of Unreal Engine 4.1, the nascent Unreal Marketplace lacked the range and depth of content that could have yielded something applicable. Early catalogue entries as far as in-game people are concerned mainly consisted of stylised sci-fi, adventure, combat or cartoon characters - not too useful for displaying a corporate exhibition space - so we had no choice but to make some.

We quickly dismissed the idea of animated people. As well as building and animating the characters, the time required for routing, AI and testing would have been too costly. That leaves us with static people. A figure is easy enough for our character artist to make and the first one looked good, so we populated an area with them. This is where we hit a stumbling block. With just one character in the scene it was fine, but with lots of these clones around it was just plain creepy. We were staring down into the Uncanny Valley. 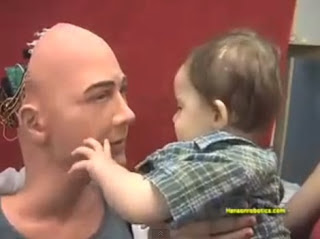 "There's nothing creepier than something that's supposed to look friendly and human, but doesn't manage either. Oh, dolls, they just shouldn't smile."

The problem was the people we were trying to make were always real... ish. So perhaps we should make them not real. Initially we tried some shop dummy types, but with a whole generation of cultural horror references burning in our collective consciousness, they were still too creepy. At this point someone made a glib comment about making the damn things cardboard cut-outs, which started us thinking, "Actually, why not?"

The reason it worked is that they have a genuine physicality while still being impressionistic. They give the sense of place, emphasising that this is a space for people, but by being obviously a human-shaped cardboard cut-out with a stand to keep them upright suddenly stopped them from being menacing 'almost-people' into harmless displays.

Once done, the set was ready for the project, but before we could share it with the Unreal community we needed to do some more work to make it 100% right. Currently the standee set was working well filling in for people in a specifically-styled and rather large exhibition space. What the set didn't do was work well much more close up in smaller spaces, such as offices. They looks a bit flat (Rim-shot, please!),

To address the issue we adopted a well-known solution learned from decades of game development: We started adding the right kind of realism. We've added context-sensitive materials, so instead of them being amorphous non-humans they are now unequivocally made of cardboard, plastic or polystyrene.

With more realistic materials applied we took it further by adding pictures and patterns and it still all worked. As long as we didn't try to make them look like real people (by adding illustrations or images of faces, clothes and accessories) we could steer away from the Uncanny Valley and maintain that physicality. Putting real-world items on the figures just made them look like pathetic non-people that are trying too hard.

This set of standees is a celebration of the non person. It neatly solves the problem of adding life into an architectural space without adding people. With careful uses of materials, logos and images, they can draw attention to specific points of interest, navigate the viewer through a scene or just stand back and be nondescript, but always looking well-finished and logically not at all human.