Using the assets in the Switches And Lights pack

This pack contains models and Blueprints for adding lights and electrical fittings to your scene. Not only do these decorative items add finishing details to your scene, the lights can be wired to the switches to make them functional. 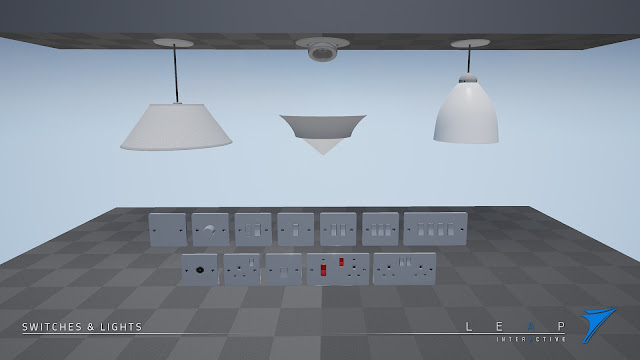 All the assets are constructed at high detail in real world sizes primarily to fit architectural visualisation scenes. However, for this reason the items may seem small for game environments. All the assets can be scaled and adjusted to fit such applications with no ill effects on the operation of the items.

For a preview, take a look at the video here.

The lights and switches have been constructed to make placing, connecting and editing of their appearance as simple as possible. They should be able to be placed and used with little or no set up or adjusting, other than to suit your own visual preference.

Simply follow these steps to see how to place a light in the scene and to make it function by flipping a switch.


6. Connect the switch to the light

Once you've got the hang of this combination, add more lights and switches to the scene and wire them up in different combinations. If you want to remove lights from a switch control, click the arrow next to the light name and select 'Delete'. To clear them all, click the trash icon next to the Target Lights setting. If you want to delete a light from the scene, you may get an Unreal warning saying that there are other actors that refer to it. Don't worry, it will just mean that those switches that operate it will have an empty entry in the Target Lights setting, but this won't adversely affect the operation of the lights.

All the example files are found in: Content>SwitchAndLightPack>Maps

This scene features a series of rooms with different examples of lights in each. The lights are wired to a switch for each room to demonstrate how user interactions work.

There are four light types: a ceiling lamp, a pendant light, a wall light and an adjustable downlighter. These are all provided as blueprint actors in the folder SwitchAndLightPack>Blueprints

There are 12 switch and panel actors included as blueprint actors in SwitchAndLightPack>Blueprints. The actors fall into two functional types:

Any switch, panel or socket that has a physical switch as part of the object can be assigned to control lights. Although visually different, all these actors share a common set of controls to determine their visual appearance and functionality.

The switches have the following settings

Each interactive switch has a set of default input trigger events in its Event Graph. If you have a game mode set up with bindings, just add the input event at the same point to add your own input control and remove any unwanted inputs. A game mode binding was not included by default to stop the system being limited to a particular Game Mode or predetermined project setting.

These are placed as actors and can have their materials set via the details panel. However, since they have no switches, they cannot be assigned to control lights. NOTE: The highlight material setting has no effect since the items are not interactive.

New comments are not allowed.